Two years ago, in November 2013, I married my best friend – Maria. By that point in our relationship we had been together six years; had traveled Europe with each other four times; and had shared three homes. At some point through all of that, I realized I wanted to spend the rest of my life with her; and somehow, apparently, convinced her the same for me.

Early in the first year of our relationship (2006) we found “our song”. As most guitar players do at some point, I started showing Maria how to play guitar. Both of us were fans of The Weakerthans, who have a song called “My Favourite Chords”. Here are the lyrics:

They’re tearing up streets again.
They’re building a new hotel.
The Mayor’s out killing kids to keep taxes down,
and me and my anger sit folding a paper bird,
letting the curtains turn to beating wings.

Wish I had a socket-set to dismantle this morning.
And just one pair of clean socks.
And a photo of you.

When you get off work tonight,
meet me at the construction site,
and we’ll write some notes to tape to the heavy machines,

like “We hope they treat you well.
Hope you don’t work too hard.
We hope you get to be happy sometimes.”

Bring your swiss-army knife, and a bottle of something,
and I’ll bring some spraypaint and a new deck of cards.

Hey I found the safest place to keep all our tenderness.
Keep all our bad ideas. Keep all our hope.
It’s here in the smallest bones, the feet and the inner-ear.
It’s such an enormous thing to walk and to listen.

I’d like to fall asleep to the beat of you breathing
in a room near a truckstop on a highway somewhere.

You are a radio. You are an open door.
I am a faulty string of blue christmas lights.
You swim through frequencies.
You let that stranger in, as I’m blinking off and on and off again.

We’ve got a lot of time.
Or maybe we don’t,
but I’d like to think so, so let me pretend.

These are my favourite chords.
I know you like them too.
When I get a new guitar, you can have this one
and sing me a lullaby.
Sing me the alphabet.
Sing me a story I haven’t heard yet.

The combination of me showing Maria how to play guitar and my leaving to go on tour frequently in our early relationship solidified “My Favourite Chords” as OUR song. There were many times while I was far from home that I would listen to that song after talking to Maria on my cell phone – using the song as a lullaby to calm me into happier thoughts of being at home with her.

In 2007 we lived in Port Richmond in Philadelphia, in an area that was not very pleasant and therefore was very affordable. For our one year anniversary Maria painted me a still life based on the lyrics of our song; a gift which would become one of my favorite gifts ever. She had painted it and wrapped it up for me to open on our anniversary date.

One day in July 2007, before our anniversary, both of us had the day off. We decided to go to the post office to pay some bills and come home in time for Judge Mathis, one of the only programs we got with bunny ear analog antennas (this was before it was made digital a few years later). We left our home around 1pm, and returned around 1:20pm. In that time someone had broken into our second story bathroom and stolen Maria’s Macbook, my laptop, change jars, and various small electronics (iPod nano, small digital camera, etc), and exited out the back kitchen door that they had unlocked from the inside. All of last few years of Maria’s art was on her Macbook, and the album I was in the middle of recording was on my laptop. As two poor young adults with no real possessions other than what we used to create art, to have such critical tools taken from us was devastating.

After hours of devastation, filing police reports, and questioning the safety of our own home, Maria decided to let me open my gift for our anniversary early. That gift was the still life painting. 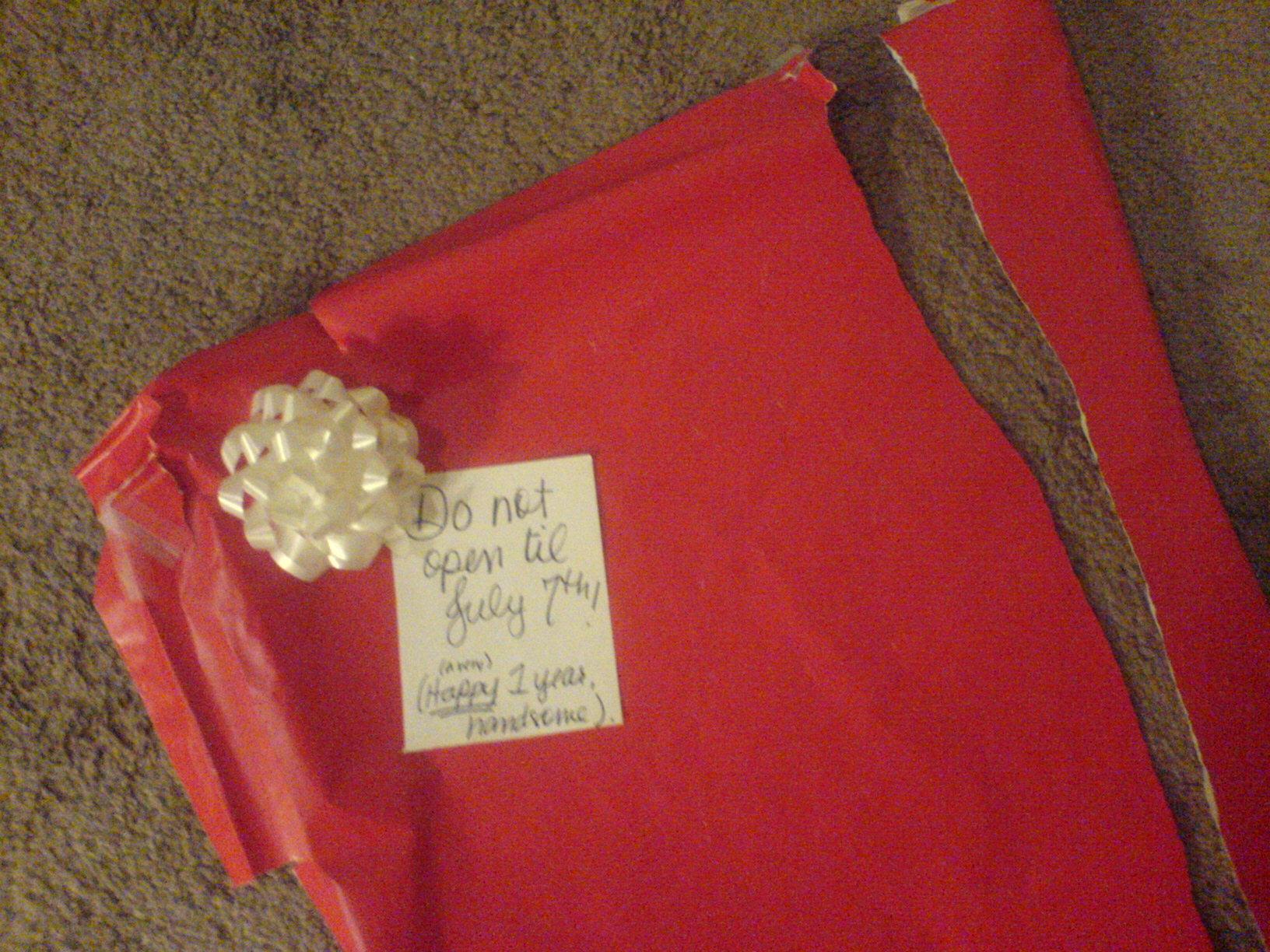 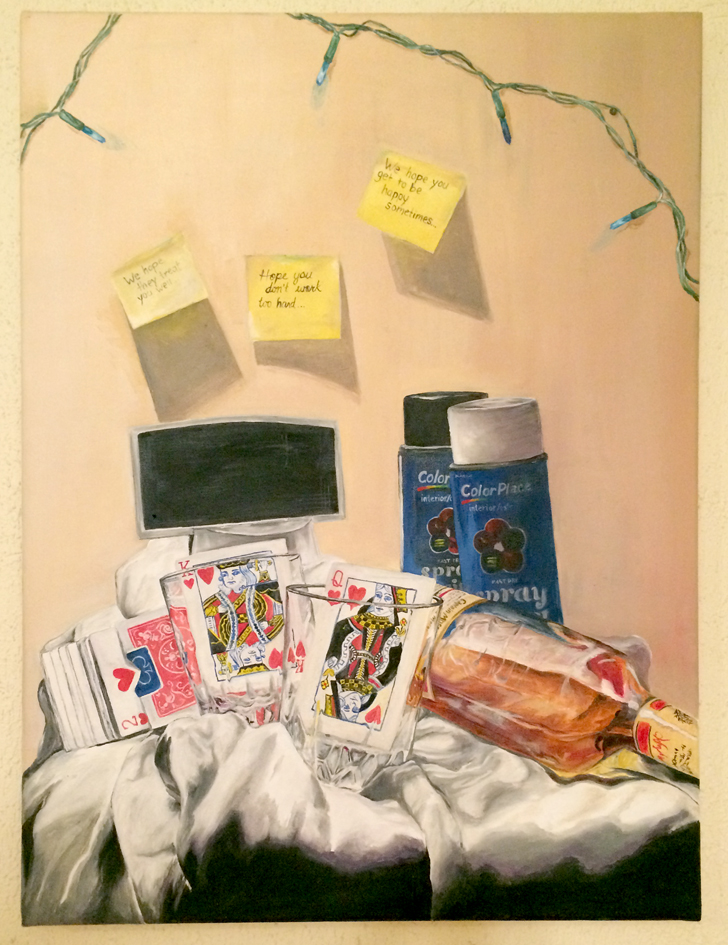 It was bittersweet. Such a beautiful gift from the one I love, given to me at a time when we were both still wrapping our heads around what had just happened to us.

Years later, I can’t help but think that as random as the burglary was, my receipt of the painted still life at that exact moment further solidified the meaning of the song as it relates to us. At any rate, fast forward a few years…

In November 2010, I had asked Maria to marry me (which is a hilarious story itself that I’ll save for another day). In February of 2011, soon after the euphoria of “we’re engaged!” had worn off, Maria got accepted to her top two MFA programs. She had decided to attend the MFA program in NYC; so we decided to wait for our wedding until after she completed her program in mid 2013.

By the way: 2013 was a CRAZY year for Maria: She graduated with her MFA after final crits; had a solo show in Philadelphia; had planned a wedding; and had married a stud – all in one year!

While Maria was at school, she was building up her artist network and was testing the social media waters. On a now-archaic photo sharing website, Maria had posted a photo of the still life she had painted for me, which later rendered these comments:

Cara and Maria went on to become friends, and we even have some of Cara’s work hanging in our home today.

Even before we got engaged, I knew that Maria and my first dance as a married couple was going to be to the song “My Favourite Chords”. After stewing on the comment that Cara had said to Maria, and as Cara and Maria started to talk more, I got a crazy idea. Could Cara talk to John Samson (singer/songwriter of The Weakerthans) and ask him to perform a video dedication to us on our wedding day? It was a long shot, but one that I really wanted to try for.

I found Cara’s email address and started talking with her about this. We had a few weeks of correspondence – the most nerve-racking weeks of my recent memory. Could she get in contact with him? Would he be open to do it? How would the logistics work out? Am I asking for too much of a favor? Et cetera.

Eventually, Cara was able to work out the details. She was just as crazed as me, since she’s just as much of a fan as we were! Cara video-recorded the performance and emailed me after she did. THIS was the first moment when I realized that it was actually going to happen. I received her email as I was driving home, and I nearly crashed because I was crying with joy (and emailing her back). And in her helping out for this, she just got a private performance from John Sansom, something I’m jealous of to this day.

She later sent me a draft version, and I was equally losing my shit.

After I received the video from Cara, I decided to edit in some photos of Maria and I over the years of our relationship. The end product is displayed at the end of this.

Leading up to our wedding day, I worked with the DJ and venue to make sure I had access to a projector for my laptop to play the video. The day of the wedding was an insane day, filled with missing adaptors, glitching playback during a dry run, and me sneaking around with my laptop for seemingly no good reason (to Maria); but in the end it worked.

As we approached for our first dance, I pulled out my laptop and hooked up the last of the cables, and set up a projection screen. Maria was understandably baffled at what the heck was going on. The galaxy background of my Macbook came up on the projection screen, then the solid black QuickTime window; then I hit play and rushed back to Maria.

“HOLY SHIT! ARE YOU FUCKING SERIOUS?!” Maria screamed at the top of her lungs as the video came on, and repeated that second sentence several times throughout. She instantly became a wad of mush. We danced slowly while watching John Samson serenade us for our first dance, as well as a slideshow of the last few years of our relationship scrolled by.

Most of the family members in the audience did not know who John Samson or The Weakerthans was. Some even asked if I had someone else play one of my own songs. None of that mattered – Maria got it.

This is only the second time, but whenever our wedding anniversary comes around I do not only think about the tons of fun the actual wedding and the “friends-moon” afterward was. I also think about how this video came together with the help of good friends, luck, and a song that my wife and I decided was OUR song some nine or so years ago.