As I prepare to go vote in the democratic primaries, I decided it’s perfect timing to share this short essay I never posted. The following essay was written immediately after I voted in 2015’s Pennsylvania elections (gubernatorial, etc), on November 4th.

If you’re reading this and reside in PA and are registered with your party and it’s still April 26th 2016 – GO VOTE! And no bullshit excuses, because the only thing worse than “just one vote” in a world of potential corruption or “choosing between the lesser of two evils” (or whatever rationale) is the fucktard that oh-so-conveniently hides behind such an excuse. People who don’t vote (yet are capable; an important distinction) are assholes, and don’t deserve the voice they use to complain about why they choose not to vote.

And as one last attempt: if you’re on the fence about voting, then there’s a possibility that a cartoon could help you decide. Here’s something I whipped up last night for such a person: 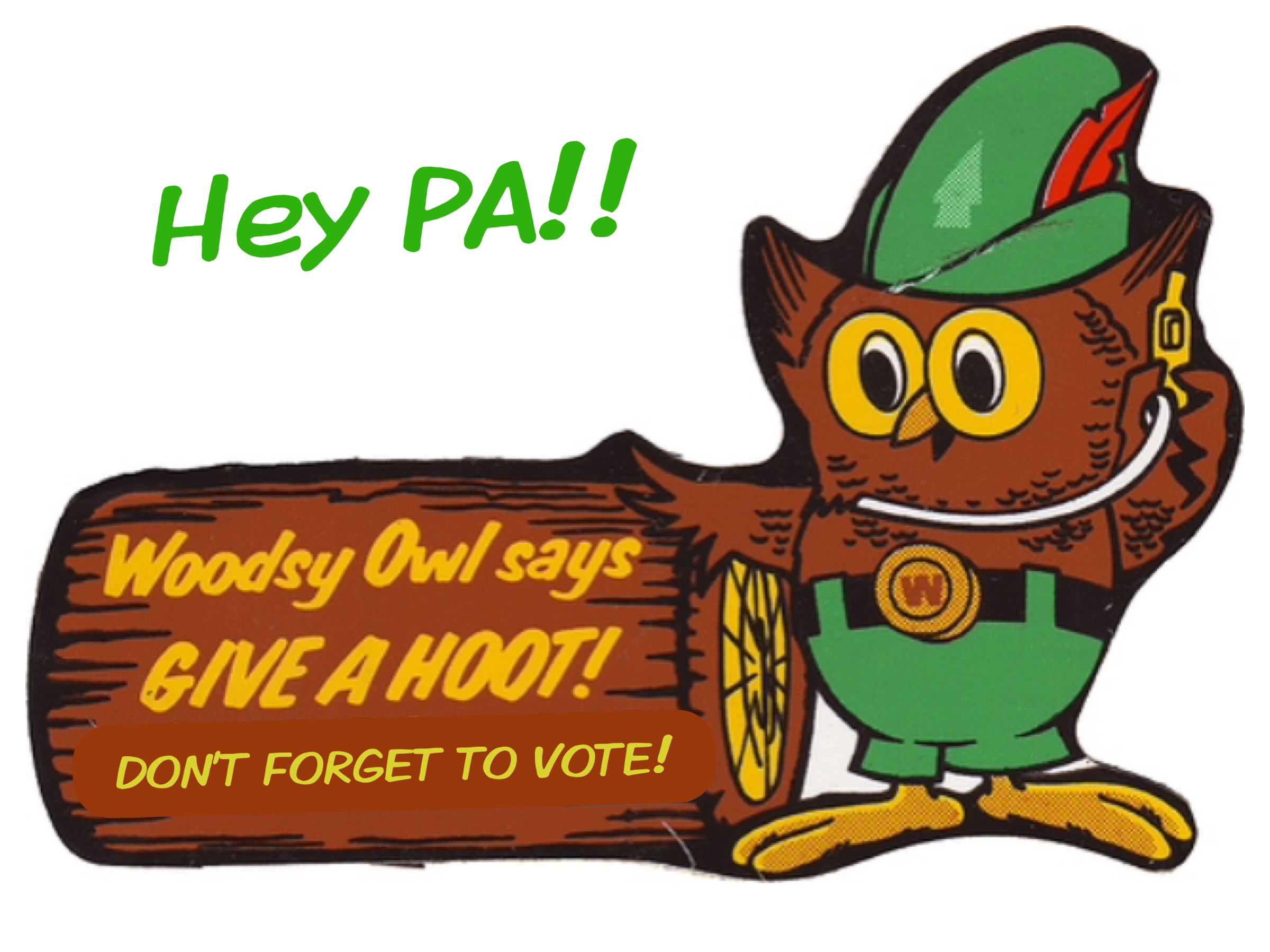 As I walked back from the South Philadelphia Senior Center, my local voting place, I saw a black woman in late 30s-40s hanging Tom Wolf for Governor door hangers on the side across the street from our home. She already hung one on our door, as well as the other doors on our side. I wanted to tell her “I just voted”, to see if she’d ask me for whom; and even if she didn’t I would offer that it was for whom she is hanging these for.

Instead, I just took the hanger off, unlocked my door, and walked in, while keeping the door open (but screened door closed), as it’s an unusually beautiful day – given the frigid weather as of late.

I walked through the living room, then dining room (though they’re not really separate rooms, as any row home resident knows), into the kitchen. As I put the political hanger on our fridge with a magnet amongst the other political hangers I hear a conversation start up outside across the street.

Before talking about the conversation, I think it’s important to acknowledge the differences in political “junk mail” our door step has seen. From Wolf: it’s essentially just “Vote for Wolf; polls open 7am-8pm”. From South Philly Democrats: it’s “vote democratic: 201, 202, 204; or push button #2”(straight ticket democrat). From Corbett: it’s an appeal to second amendment rights, and Corbett’s record versus the rights-stealing Wolf. I appreciate itemized breakdowns over generalities, but only when it’s not fear mongering nor propaganda.

Anyhow; I hear my elderly south Philly white neighbor across street start to, seemingly aggressively, talk to the lady passing out the Wolf door hangers. He says, “I already voted” in a stern voice. As I thought, “I wonder for whom” and “boy, does he sound angry; this can’t be good,” the lady politely says “Oh, I’ll just take this from your door then. Thank you for voting.”

He responds “yeah, I already voted; and so did my youngest son. We voted for Wolf.”

She sounded a bit taken back (so did I, frankly), and replied a quick canned response about the change Pennsylvania needs from someone like Wolf.

He agreed, then started to open up with why he voted for Wolf, and how he feels just terrible for the state’s teachers. His voice continued becoming more welcoming. They then started to have a short-but-specific conversation about issues they have and see with the state of Pennsylvania.

Although south Philadelphia leans democratic, I live on a street where I’ve heard neighbors complain about “jungle monkeys” encroaching into their neighborhood, from what “should” be their east-most barrier of Broad Street (our block is east of Broad). Given that sentiment, I was afraid for the lady hanging door hangers when I heard a neighbor sternly say, “I already voted”.

I enjoyed the experience that I witnessed so much – and how my initial perception was, thankfully, wrong, that I decided to start typing in a Notes document in my iPhone what had just happened. As I’m now wrapping up, I look outside in time to see another neighbor take the Wolf door hanger off his door angrily and through it to the ground. 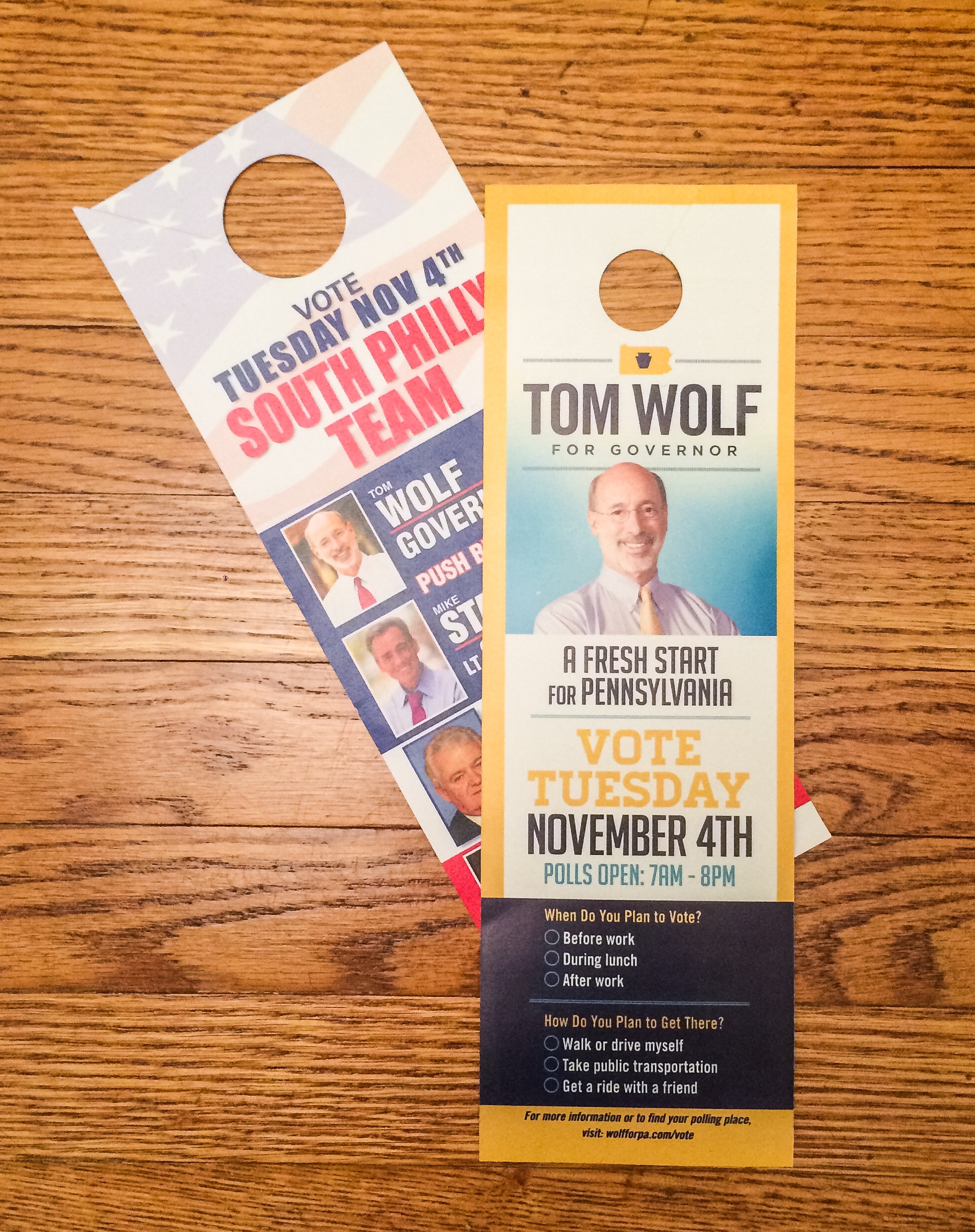