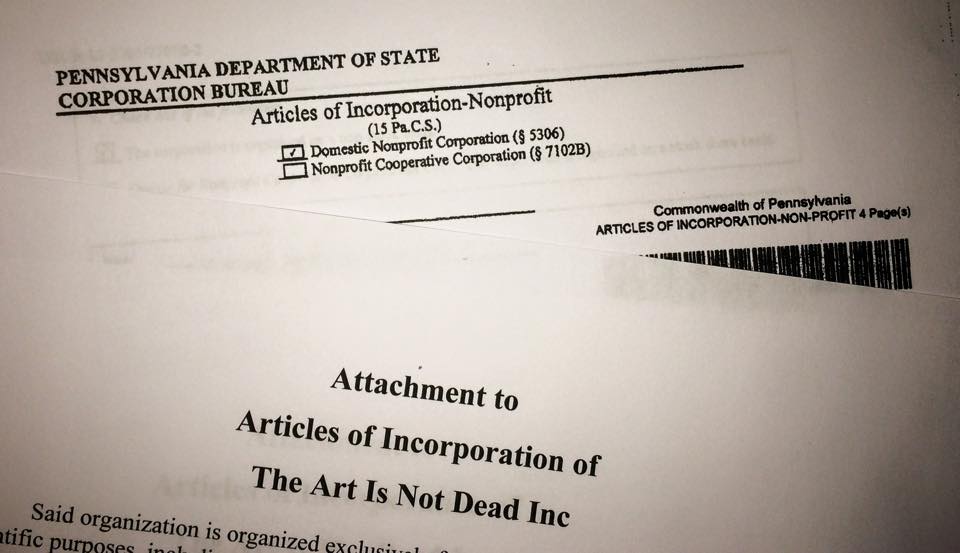 In 2007/2008 Maria Teicher and I started the artist collaborative named The Art Is Not Dead. The name we landed on came from lyrics I wrote around 2007, from a song titled “No, It’s Just Different” (Here’s a video of me performing the song in Bruck an der Leitha, Austria in 2008). Around that time we consistently heard how dead art was, and from the vast amount of creative talent from people we’d met in the last few years (as well as from a historical context), we disagreed. We truly desired finding a way to not only bring those people together, but help them any other way we could.

Therefore, The Art Is Not Dead started as a small indie record label and creative exhibition space (in south Philadelphia, which started in 2009 and ran until 2012). We were looking for an artist community within the city we resided, and set forth to find and tie into it (or build it). There’s much more of an expansive history behind all of this, but we’ll save that for another day. Let’s jump forward a few years…

After much planning throughout 2014 and 2015, we decided that in order to scale up and provide a larger impact in Philadelphia and for its exhibiting artists/musicians, we needed to incorporate into a non-profit organization. This confused many of our peers, to which we explain thusly:

Maria and I provide our services for artists for free or at-cost. We also both have our full time creative endeavors, full time jobs, and the typical perils of life. We’d like others to provide similar services to what we provide, but it’s hard to ask someone else to do it for free – nor should they (unless they’re crazy like me and Maria!). For example: If a recording engineer is good at his job, why should he take away time from his schedule that compensates him for his quality work in order to help out a Philadelphia band? Instead, what if we could, as a non-profit, pay that same recording engineer their going rate (or potentially a lower rate if they wanted to donate some of their time), so that the band receives assistance with the recording of their album AND the engineer is justly compensated?

So with the direction of incorporating as a non-profit, much was done throughout the first half of 2015. Business planning, meetings with small business professionals and lawyers, writing articles of incorporation, writing bylaws of organization, filing other necessary State and Federal paperwork – it was a tremendous undertaking. For us, and the vision of what The Art Is Not Dead could offer artists, musicians, and creatives – it was a task worth tackling.

We’ve come a long way over the years. There’s still an exciting road ahead, and we have some wonderful things in store throughout the remainder of 2016 and beyond. Thank you all who have been part of this journey, from encouraging words to sweat-equity. We wouldn’t have gotten this far without your participation and enthusiasm.