This past Thursday I had stayed home from work. Among many things going on that lead to me staying home, a family member of mine had a stroke (or series of strokes), and was in the ICU the entire day. I could not be there physically (they are in another state), but I was on the phone with family throughout the day.

Maria and I were texting back and forth as well, while she was at work. She had texted me at 1:24pm, saying that if I needed to talk to her I could call her at work. I did not reply “Thanks babe” until 1:57pm. Since she was at work and thirty-three minutes of life-draining work had been occupying her brain, she didn’t understand my reply. To her, it was a seemingly out-of-the-blue “Thanks babe.”

She replied “?”. I was confused at why she was confused. I sent a screenshot of our conversation up to that point. She immediately got it, and we both went back to whatever we were doing. 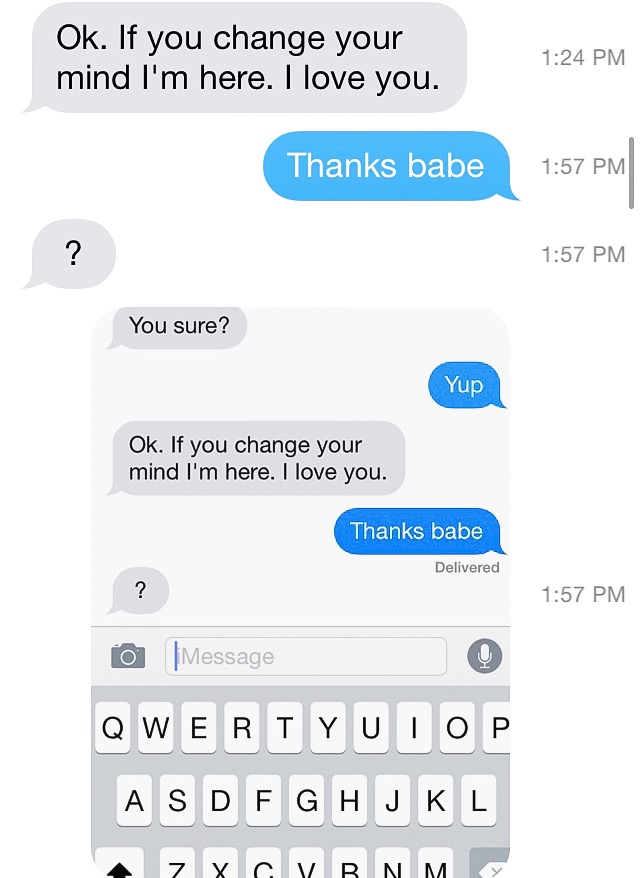 After sending her that screenshot of our conversation, my brain somehow went trailing. I started thinking of using text message screenshots for lyrics, and wondering how one could illustrate something like reverb in text message. I immediately started creating this: 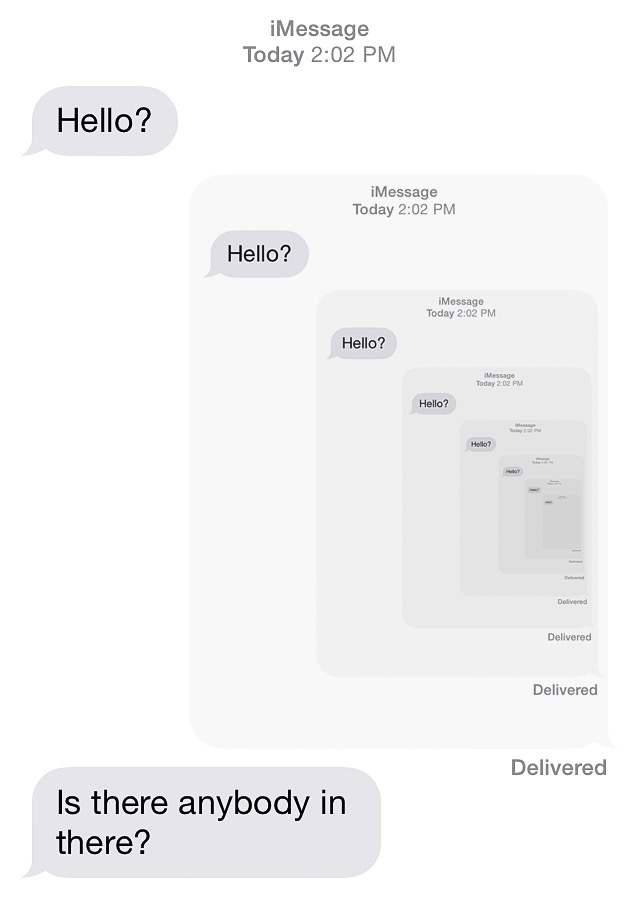 That song was the first one to come to mind. After I made that screenshot and sent to Maria at 2:10pm, my brain kept singing that song over and over again. After a while of it echoing in my head, I picked up my guitar to see if I could figure out how to play it. After I did, I then wondered if I would be able make a scratch recording of it on my iPad (a wedding gift from my lovely wife, which has facilitated much songwriting and demoing).

I spent an hour recording guitar, bass, and vocals; and mixing all of it together (all on the iPad). At 4:30pm I sent Maria this audio file:

I only did the first verse and chorus (it was just for fun anyways, not a legitimate song attempt). As I was getting ready to record vocals I brought up a website of the lyrics to make sure I was singing the right words:

Is there anybody in there?
Just nod if you can hear me.
Is there anyone home?
Come on now
I hear you’re feeling down.
Well I can ease your pain
Get you on your feet again.
Relax.
I’ll need some information first.
Just the basic facts.
Can you show me where it hurts?

There is no pain, you are receding
A distant ship smoke on the horizon.
You are only coming through in waves.
Your lips move but I can’t hear what you’re saying.
When I was a child I had a fever
My hands felt just like two balloons.
Now I’ve got that feeling once again
I can’t explain you would not understand
This is not how I am.
I have become comfortably numb.

I never quite appreciated the two-person dialogue going on in this song before recording it. The ‘doctor-like’ figure’s verses are in Bminor. The ‘patient’s’ responses in the chorus start in the relative major of D. It’s quite beautiful.

When I started writing this, I had the intention of wrapping it up around here, until I started realizing that I think my brain was playing some unconscious tricks on me.

Also throughout Thursday, while my family member was in the ICU after their stroke(s), one of the troubles happening with them was that they could not verbally communicate; nor could they open their eyes. They were only able to demonstrate their consciousness by squeezing their hands in response to questions.

Maybe this was lurking in the back of my head. Cognizant of it now, the thought of my family member on Thursday was somewhere between this song and Johnny Got His Gun.

On Friday evening, I received a text update passed along from another family member. My family member that had the stroke had been moved out of ICU into a private room. They have since opened their eyes, and will soon start physical therapy. The text ended:

…she can hear us. I am playing my iPad and she seems to be responding to music well. She hums and taps along to the rhythm. No talking yet but hoping for the best.